Toti O’Brien’s mixed media have been exhibited in group and solo shows, in Europe and the US, since 1995. She has illustrated two children books and two memoirs. Her artwork has appeared in Brain of Forgetting, The Adroit, Maudlin, and Riddled With Arrows, among other journals and magazines.

From her interview with Kathabela Wilson:

“I am a displaced person:  I’ve been through the entire immigration process twice and that marked me. Places are relevant in my artwork because I don’t take them for granted: thus I love them more. I came to Pasadena 10 years ago, I was forced to leave for 3 years but yearning to come back. I consider it my place of choice: it’s where I’ve decided to share myself. For a decade I’ve been active in all sections of the local art community: I’ve built my belonging. It’s not a right of birth, it’s a labor of love. Also, I was raised in an orange grove on the Sicilian east coast, full of Mediterranean flavor: Pasadena brings back that familiar taste, and I love it.” 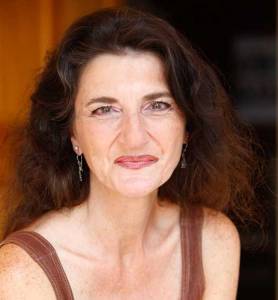 There is a fracture line in the beginning… of my art and myself, for sure. Is it the Atlantic Ocean? In the upper right corner of “Alter Alter” a couple is visible—the man holding a clumsy cardboard suitcase. Here are my grandparents, immigrated in South of America in the nineteen twenties. I have painted a bigger-than-life portrait of them—“Alter Alter” contains a picture of the picture, cut out, miniaturized, blended into a more complex narrative.

Someone’s always falling, behind the corner, close by. Someone we know well. A new baby down the uterine channel perhaps, tumbling into life. In “One More Love Letter #2”—addressed to my father, from whose grace I have often precipitated—one such flight is taking place. No harm done. Visibly, my work doesn’t believe in gravity. Neither do I.

I have been a dancer for my whole life. I have often hoped the motion inhabiting my body would spill into my visual work, giving it some of its energy, its lightness, its joy.

I am also a singer. Here is a quote from the song I am rehearsing now—a verse by American poet Sarah Teasdale: “I will make this world of my devising, Out of a dream in my lonely mind.” Each time I go up the scale with these beautiful words I have a sigh of gratitude, a thrill of recognition.

In my artwork, I explore the liberty of making worlds of my devising—one at a time, out of scraps, of course out of a dream. They can be small universes—“Miniature Map #5” is only 6 by 6 inches. Even when they spread on the wall, though, they layer and juxtapose tiny cells—the eerie, fugitive fragments memory and the unconscious like to build into visions. So do I.

Credits for art in Longridge Review: